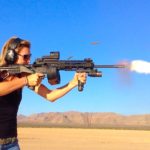 In the United States of America there are many cherished rights. We enjoy the right freedom of the press, freedom to redress our governing officials, freedom of religion (though it is under attack), freedom to not self-incriminate, freedom to associate, and so many others that are enshrined in the Bill of Rights in the United States Constitution. Another one of these rights is the right to keep and bear arms. Although this right is often under virulent attack, it is nonetheless a cherished right of the American people. Why? The reason often sited is that this right ensures the protection of all other rights from the onslaught of a tyrannical government.

This all being said, there are over 300 millions guns owned by the American people. Some may wonder why the American people possess so many guns, but that is not an issue in the minds of the American people. Americans don’t merely own guns because of some fear of tyranny (thought that certainly is a real concern when one considers world history), but Americans also own firearms for recreational and sporting purposes. It is not uncommon for someone to take his or her 9mm Semi Automatic Rifle out to a gun range to take up some target practice. Many Americans will go out into land where they can go and fire off some rounds for fun and shoot at clay pigeons.

Additionally, guns are a very common tool used when hunting wildlife. While it is certainly an option to hunt with a bow and arrow; however, the task of hunting is certainly made more manageable when using a firearm. Say, for instance, you are hunting a bear. You fully intend on hunting that bear and using all that you can harvest from it. But, let’s also say you have the choice between a bow and arrow or a rifle, which would you choose? Yes, the thrill of the hunt may increase with a bow and arrow, but so do your chances of dying. A properly chambered rifle with certainly help you protect yourself and kill the animal in a quicker, more humane fashion. The same goes with hunting large game animals like deer, elk, and moose.

Those who have never fired a gun do not know what they are missing. There is a rush that comes from pull of the trigger to the recoil to the smell of gunpowder. The great thing about firearms is that they can also be exquisite works of art. The designs, the engravings, all of it makes for a tool that is both dangerous and exhilarating. Furthermore, firearms are often things that are passed down from father to son, grandfather to grandson and they carry with them stories that teach generations about things like responsibility and bravery. So, these things must never be taken for granted or treated carelessly. Firearms are to be treated with the utmost respect and should be protected for generations to come.

Things you should consider while buying an air purifier

Things you should consider while buying an air purifier

Do I need to buy an air purifier if you ask me this question in the 1900s my answer will be...

Imitation crab is made with a type of fish called surimi. Manufacturers add fillers, flavoring and color to surimi to mimic...

College applications are increasingly getting more and more demanding, in addition to standardized test results and school GPA, most colleges and...